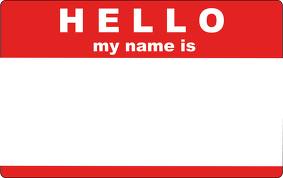 In Revelation reading today, it said each one will be given a white stone with a new name on it. Will we receive a white stone/new name? I know several people throughout the bible receive new names after they’ve been transformed in some way.

G asked me this week why her other friends call their church leaders “Pastor” and we call you “Father”. I don’t know that answer. Could you help with these two name questions, please?

In terms of the white stone and new name I can only venture a guess. It was the custom to give a white stone as entre to a banquet, like a formal written invitation today. Given that the Wedding Feast of the Lamb is also in the Revelation this represents an invitation to the heavenly banquet to those who have overcome.

In terms of the new name that it written upon it, it may represent the transformed life of someone who has overcome. It may also mean that we literally receive a new name, since there is a pattern of this with Abraham,, Sarah, Jacob and Peter, as you mentioned. Also unless we are speaking English in heaven my current name would be meaningless. So perhaps we will receive a new name in a heavenly language that represent who the Lord sees us to be.

We call our clergy “Father” following an ancient tradition. In the Old Testament leaders/mentors/patriarchs were called father as when Elisha called Elijah “father” in 2 Kings 2:12. In the New Testament St Paul referred to himself as a spiritual father to Timothy and to the churches ( I Tim 1:1, I Cor 4:15). In the early Church all bishops were called “papa” until later when that term became reserved for the Bishop of Rome. Also very early on the leaders of monestaries were called “abbots” which is derived from “abba” or “daddy.” When I address the Bishop formally I will refer to him as “Right Reverend Sir, Father in God.” It is a term both of respect and endearment that implies a familial connection, which is accurate since we are the family of God.

Of course some object that we should not use the title “father” since Jesus said to call no man “father” (Mt 23:8-11). But there are problems if we take this literally. First we would then be wrong to call our dads “father” because He said “call no man on earth father.” Second, we would have to accuse St. Paul of error in calling himself a father to the church. Third Jesus also said to call no man “teacher” and yet we have Sunday School teachers and Bible teachers and St. Paul calls himself “teacher” in 2 Tim 1:11.

Jesus was making a point here not about what title we give to people but how much authority that we give them in our lives. Jesus points us to God as our ultimate father and the Messiah as our ultimate teacher and we must not eclipse them with human fathers and teachers. That is how cults are created. It is also true the using the term “pastor” instead of “father” does not automatically ensure that there will be no abuse of power. Since Jesus ends this passage with the exalted being humbled, it is a warning to all who have positions of authority to be servants and not lords.

1 thought on “Stump the Rector”