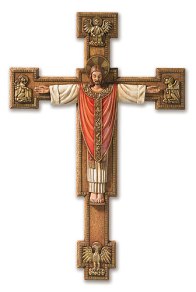 I once had a person confront me in an angry tone concerning my crucifix. “Why do you still have Jesus on the cross? Don’t you know that He rose from the dead?” In an attempt to diffuse his anger I palmed my forehead and said, “When did that happen? No one ever tells me anything anymore.” It didn’t work.

I still don’t know why that person was so exorcised about a crucifix but I do know it bothers some. So here are some explanations, offered in form of a palm branch. In the end if you still want an empty cross then God bless you because the point here is that both symbols are valid.

First, yes we know that Jesus is not still on the cross, just as you know He is not still a babe in the manger. The idea is that there are monumental events in Jesus’ life that are important to commemorate, such as His birth and His death.

Second, a crucifix reminds us that it is not the cross that saves us rather it is Jesus’ sacrifice that saves us. A crucifix points us to Him rather than to the instrument of His death.

Third, a crucifix reminds us that there is no Easter without a Good Friday. Parallel to that thought, there is no forgiveness without repentance and there is no crown without a cross. These are important reminders to avoid the kind of triumphalism that we see in the health and wealth heresies. His pain puts our pain in proper perspective.

Fourth a crucifix confronts my pride. As we see Him on the cross we ask why. And the answer is that He is on that cross for my sins and for the sins of the whole world. He has come for the ill and seeing Him on the cross reminds us that we are in need of the Physician.

1 thought on “Why the Crucifix?”