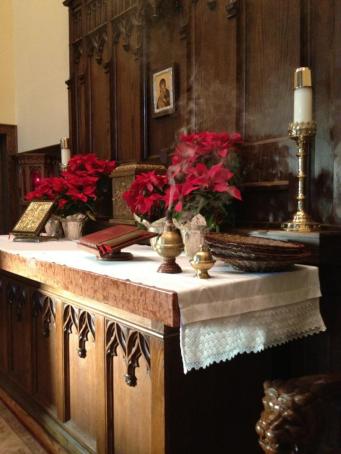 The English writer, poet, philosopher G.K. Chesterton, of whom George Bernard Shaw described as having a colossal mind, said “The great majority of people will go on observing forms that cannot be explained; they will keep Christmas Day with Christmas gifts and Christmas benedictions; they will continue to do it; and some day suddenly wake us and discover why.” We certainly do not want to be those people and so let’s pause for a moment and consider what it is that brings us here tonight. Why are we here?

For some the Midnight Mass is a treasured tradition and while tradition sometimes gets a bad name it as the glue that keeps our lives from being shattered by chaos. I have a vivid memory of when it became a beloved tradition for me. I was in elementary school and we were living in Rhode Island at the time. We lived within walking distance of our parish and so we walked to church that Christmas Eve night. It must have started snowing right after we entered the church because by the end of the Midnight Mass there was at least an inch of snow on the ground. I remember the priest in his biretta and black cape standing in the snow wishing us Merry Christmas as my family crunched through the snow on our way back to our home. It was like a scene from a Christmas card. If this is a treasured tradition to you then no doubt you have a similar memory that made it so.

But as important as tradition is, there is an even more important reason that we gather on this night and the clue to that reason can be found in this picture that I am holding. Some of you are old enough to recognize what these are. They are called S&H Green Stamps. When my mother would go shopping she went to stores that gave these stamps with a purchase. And the more she purchased the more Green Stamps she received. These would be collected and glued into Green Stamps books and when she had compiled enough books she would go to another store to exchange the books for merchandise such as a lamp or a toaster. Does anyone recall what these stores were called? They were called Redemption Centers. Redemption is where something is exchanged for something else and it is a term that comes straight out of the Bible. We just heard from Titus, that Jesus gave Himself to redeem us from all lawlessness.

But you can tell from how St. Paul uses this term in Titus that it is more than simply an exchange. There is more going on here than swapping Green Stamps for a lamp. In saying the Christ has redeemed us FROM all lawlessness, St. Paul uses an Old Testament idea of redemption that is an exchange to free someone from bondage. So I would submit to you that ultimately we come here tonight to celebrate our emancipation and to give honor and worship to the One who has set us free.

But wait. Isn’t it a little over the top to describe mankind’s condition as being in bondage to lawlessness? I don’t think so, not if you are paying attention! On a global level we have international jihad with country after country throughout Europe on high alert. The Middle East is on fire. There are active genocides in a number of nations across Africa. The figures change daily but one source I read identified 68 nations in significant wars battling 802 identifiable rebel groups, anarchists and drug cartels.

On a societal level, for those above 12 years old, one in every ten Americans is an addict. The recent rash of police assassinations are surely a product of lawlessness. Chicago’s murder rate had jumped 85% over last year reaching the terrible milestone of over 700 murders this year and counting.

And if we are honest with ourselves we will admit that lawlessness is true of us on a personal level as well. As St. Paul so accurately put it, we do things that we know full well that we are not supposed to do and we don’t do that things that we know full well that we are supposed to do. An old prayer correctly adds, “and there is no health in us.” No it is not too much to describe an unredeemed condition as lawlessness. God reveals to us through Holy Scripture that our dilemma is not simply a lack of self-discipline or the need for more education or more self improvement books. Our dilemma is that mankind is separated from God AND we are in bondage.

So the Father in His love, understanding our dilemma, sent His Son to do for us what we could not do for ourselves. As the Christmas carol puts it, “to set us free from Satan’s power when we have gone astray.” He did it by paying a debt that He did not owe, to free us from a debt that we could not pay. And how did He pay it? How did He redeem us? St. Paul tells us in Ephesians 1. “In Him we have redemption through His blood, the forgiveness of sins, according to the riches of His grace….” The exchange was His life for ours, and He did it willingly and He did it out of love. Jesus said, “Greater love hath no man than this, that he lay down his life for his friends.”

But the good news gets even better. He did not redeem us just to leave us on our own to muddle through. As St. Paul told Titus He redeemed us “to purify for Himself a people for His own possession.” This is an echo of what the Lord said to Israel from Mt. Sinai. “If you will indeed obey my voice and keep my covenant you shall be my treasured possession among all peoples… and you shall be to me a kingdom of priests and a holy nation.” So the Lord didn’t redeem us from slavery to lawlessness just to make us His slaves. He redeemed us to make us His treasured possession, to make us His family, to make us heirs of God and joint heirs with Christ. This is what we celebrate tonight.

But there is more! The text from Titus goes on to show us what we are to do with our freedom. After being described as a people who are redeemed from lawlessness it says that we are “a people of his own possession zealous for good works.” Let’s be clear. It is not our good works that redeem us. No. As we just heard from Ephesians we are redeemed through His blood, through His sacrifice on our behalf. But once redeemed the natural consequence is that we become zealous for good works. That is what the book of James is all about. We are saved by faith alone but the faith that saves is never alone. If there are no good works then our faith is DOA.

What is fascinating about this connection between being redeemed and being zealous for good works is that it goes all the way back to God’s covenant with Father Abraham. God made Abraham a two-pronged promise. First He promised to bless him. That blessing continues. As the spiritual children of Abraham what could be more of a blessing for us than being redeemed and made joint heirs with Christ?

But second He promised to make Abraham a blessing to others and it is through our good works that we continue blessing others. Deitrich Bonhoffer, the German theologian who was martyrd by the Nazis just before the end of WWII wrote about this in his book “The Cost of Discipleship.” He pointed out that right after Jesus delivered the beatitudes He tells the disciples “You are the salt of the earth.” They were not called to be so heavenly minded that they were no earthly good. In fact their calling as salt was for the good of the earth, especially Bonhoeffer points out, for “the poor, ignoble and weak, whom the world rejects.” As redeemed people we should be known for our good works. I heard a comedian say recently, “You can complain about Christians all you want but I’ve never seen an atheist soup kitchen.”

Next month a team is going from St. Patricks’ to Honduras to support the ministry of Mike and Kim Miller. He is an Anglican deacon and they are leading a foster home/orphanage in a tiny community in the mountains. When Mike visited us last month he spoke to our team and a number of times he referred to himself as having been a very broken man. But it is evident that God has so healed him that what is broken now is his heart for those children and getting them away from abusive situations. They started a coffee business to provide work and hope for the locals who live in abject poverty. They have built a school so that with better education the children can break the cycle of poverty. They bring in mission teams like ours to work along side the villagers to encourage them and show them God’s love. Honduras is a dangerous country and Mike and Kim are not getting rich living down there. So why do they do it? They do it because once taken over by God’s love the natural consequence, or maybe I should say supernatural consequence, is to want to share His love with others. Once redeemed the fruit of our redemption is that we become zealous for good works.

It seems that every business that you go into these days has a program to give back to the community. I love that they are doing this but I am compelled to believe that in many cases they would not be doing it unless it helped their bottom line. The Church should be leading the way in this effort but we do so with a different motive than building customer loyalty. Jesus said that we are to let our light shine so that people will see our good works and glorify our Father who is in heaven. That is our motivation. That more voices would join with the angels and sing glory to God in the highest.

So we have come tonight to this Redemption Center to celebrate our redemption and to celebrate our Redeemer. As we do so may we think ahead to the next few weeks and months and consider how we may become even more zealous for good works that God would be greater glorified. But in the meantime, rest tonight in the knowledge that you have been redeemed by the blood of the Lamb and you have been made His precious possession. Receive His peace in this silent holy night. Merry Christmas.